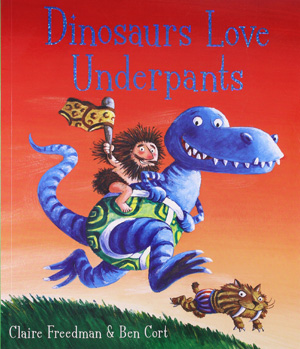 Children are all fascinated by underpants for some reason! But apparently so were the dinosaurs! When cavemen first invented underpants because they felt embarrassed parading around in the nude, dinosaurs chased them down, not to eat them up, but for their underpants!

Triceratops wore them on his horns, but Styracosaurus snatched and accidentally tore them. Woolly mammoth coats were itchy, and some pairs of underwear were just too small! Still the dinosaurs fought tooth and claw for them, looking for the just-right fit! So they started THUMPING and BASHING and CLOUTING one another, until none of them were left standing – “the fighting got so crazy, all the dinos were wiped out!”

“So when you put your pants on, always treat them with great care,
Pants and knickers saved Mankind, they’re not just underwear!”

So the mystery of the extinction of the dinosaurs is solved! Who would’ve known?! And maybe this book inspires that little one who simply refuses to, to wear ’em underpants with pride! 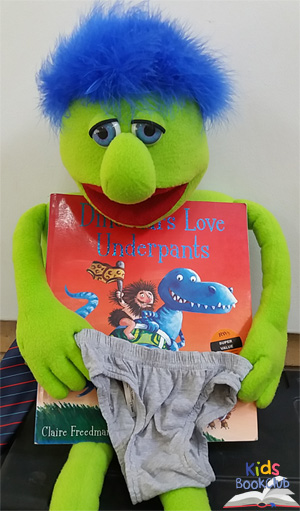 Silly Zorb thought a person should wear underwear on his head! The littlees quickly helped him right and told him where it actually goes!

Dinosaurs love underpants by Claire Freedman & Ben Cort was a hit at our Little Sprouts Book Club Hour at Thorntree Preparatory School today, even the most withdrawn little girl in the group had a twinkle in her eye and sat closer to the reader during this reading! Mission accomplished!