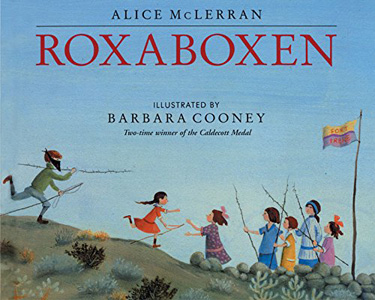 Alice McLerran beautifully captured the memories of her mother’s family when they were small. They created a place called Roxaboxen – a hill in a desert, which they transformed into an imaginary town.

She describes the imaginary play the kids engaged in, using black pebbles as money, creating roads and shops and houses with rooms and furniture in their Roxaboxen town; the “cars” they drove, and going to jail for speeding; the “horses” they so freely rode on; and the “wars” they engaged in (boys vs girls!). Even during winter times when nobody visited the place, Roxaboxen was always waiting. But what happened as time went by and the kids grew up?

Many years later, when the book was published (1991), “children in Yuma itself read it and realized that the hill it told about was right in their own town. It didn’t look the way it had then — a contractor who owned it at that point had tried to scrape it flat with a bulldozer and had done a lot of damage to its profile, scraping away the mounds of sandy soil that held “Roxaboxen money” as it tried to flatten the hill into a building lot. But the bulldozer had to give up — underneath the sandy part the whole hill was solid granite, of which the outcrop that became Fort Irene back in 1915 was only the top of the iceberg. Even though the top was hard and flat now, the kids that lived in that neighborhood didn’t care. They knew it was Roxaboxen, and soon new roads and houses began appearing. A grownup who loved the story must have started collecting desert glass, for one morning the kids found a heap sand-polished pieces of glass in glowing colors there in the middle of the hill, letting them make jeweled windows. Saved from danger of development by a Yuma-based organization called the Friends of Roxaboxen, the hill is now owned by the city of Yuma and preserved as a natural desert park; a “playground for the imagination where children today can build houses.”

Roxaboxen was converted into a park (Roxaboxen Park), and was opened in 2000. “Little Jean”, who was too frail to travel, sent her great-granddaughter, Hannah, to represent her. She also sent with her “something Jean had taken from the hill when she moved away from Yuma as a memento. Now Jean wanted to return it to the hill. As part of the opening ceremony, Hannah placed what Jean was returning – one of the special black pebbles that were the money of Roxaboxen – atop Fort Irene, the outcrop of granite that was the girls’ safe base in the war between the boys and the girls years ago”.

The author (as well as Barbara Cooney, the illustrator) had to do a lot of research, and interview various people – get to know as much as she could about the place and the events that happened there. One of her sources for information was her mother’s handwritten notebook (dated 1916), and the few of her aunts and others who played there. Her mother had also told her a lot about it when she was still alive, so she could put together a very touching story for others to share.

This was the objective of our last Book Club Hour at Thorntree Preparatory School for 2019 (Grade 4-6) – to inspire learners to try (again) to write and/or illustrate their own books!

The discussion started off with the reason why people write books. There are so many different “types” of books (genres), so people will write for different purposes – for example, non-fiction books are to inform, novels are for leisure reading, etc… In a nutshell, people write books to express ideas on paper.

But what is the real reason behind people writing? Different people have different reasons for writing. Some think they will get rich if they write a book or two, some have a wild imagination and love sharing it, so they capture it on paper. Others simply want to record some memories, as was the case in our story today. Others write down experiences, or try to prove a point (maybe to someone in the author’s life who told them they’d never amount to anything!). Still others might write to teach a moral or a lesson, or to bring a message (or warning).

The discussion about writing continued in to the history of books and print – how, at first, legends and memories of people were “recorded” by word of mouth, retold around a campfire to future generations!; and how books as we know them today started off on beech bark and bamboo and clay tablets.

The students learned about

Picture books are very popular today, and that’s why we use them so effectively in our Book Club Hours! Picture books help the reader link concepts with words. So in a case where the reader doesn’t understand what the author is speaking about (e.g. using unfamiliar terms or settings), good illustrations will explain these terms, while enhancing the story and the emotions brought forth in the text.

The learners then discussed the possibility of each of them writing and/or illustrating their own picture book for millions of readers to read, and they learned about a few things they’d need to consider to create a striking, successful picture book (research, text types, writing and editing/refining, how grammar and spelling errors are a big NO-NO, illustrating the story, and the use of colours and font types to evoke emotion).

Roxaboxen is a two-time winner of the Caldecott Medal, and hopefully inspired some young aspiring authors into action!

PS. Roxaboxen is a real place!