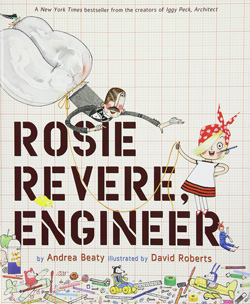 Rosie Revere dreamed of becoming an engineer, but an unmindful act of her uncle caused her to hide her ideas, plans and inventions. Even though, an engineer is an engineer and her passion to fill a need drives her to dare building a flying machine for her great-great-aunt Rose, who always wanted to fly but thought she’d dismiss the idea as an “old lady’s dreams”. When Rosie’s invention comes crashing down, she feels quite dismayed and discouraged, but her aunt teaches her that it is time to celebrate, because her “brilliant first flop was a raging success!”, now she can perfect her invention!

A historical note at the back of the book connects Rosie to her namesake, Rosie the Riveter…

“During World War II, millions of women in the United States, the United Kingdom, Australia, Canada, New Zealand, the Soviet Union, and other allied nations worked to provide the food and equipment needed for the war effort. Some worked on farms to grow food for the troops. Others built ships, airplanes, tanks, and jeeps. With the help of many women, American factories produced more than three hundred thousand aircraft, eighty-six thousand tanks, and two million army trucks during the war. In the United States, these women were represented by Rosie the Riveter, the scarf-wearing fictional character whose slogan was “We can do it”!”

Using this book at our Book Club Hour at Thorntree Prep this week, the kids learned

Very few of the kids knew who Thomas Edison was, so they learned about his efforts to provide the human race with a way to make light when it was needed. After many “failed” attempts he said, “I have not failed. I’ve just found 10000 ways that won’t work.” A fifth-grade learner (Bohlale) then added that you have to persevere, like William Kamkwamba did when he found a way to provide electricity and pump water for his family (and community) in Malawi (a previous lesson – well done Bohlale!!).

The discussion ended with a very encouraging piece by Edward Hickson, a British educational writer, and the very energetic fifth-graders (thank you Madimetsha) helped repeat the refrain: Try Again!

‘Tis a lesson you should heed–
Try again;
If at first you don’t succeed,
Try again.
Then your courage should appear;
For if you will persevere,
You will conquer, never fear,
Try again.

Once or twice though you should fail,
If you would at last prevail,
Try again.
If we strive, ’tis no disgrace
Though we did not win the race–
What should you do in that case?
Try again.

If you find your task is hard.
Try again;
Time will bring you your reward,
Try again;
All that other folk can do,
Why with patience should not you?
Only keep this rule in view,
Try again.