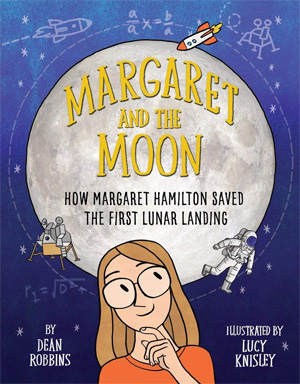 During our Book Club Hour at Thorntree Preparatory School this week, the Intermediate Phase learners were presented with questions like Who thinks Science is only for boys? Is Science only for old people? What is the difference between computer hardware and software? What is NASA? Who was the first man to step on the moon? In which year?

All of these questions were to determine what they knew about Space, and a fair amount of kids knew answers to the questions, but nobody had ever heard of Margaret Hamilton!

Margaret Hamilton is a Computer Scientist and Software Engineer who helped put Man on the Moon!

All through her life, Margaret enjoyed school in general, and she was a hard worker! But there was just something about Math that she liked more than anything else! She just loved working out the answers! So one day, she decided to take an internship at MIT (Massachusetts Institute of Technology, a private research university in Cambridge, Massachusetts), developing a system (software) to predict weather and to detect enemy planes. There, she fell in love with the discipline of coding.

One day, her husband spotted an advertisement for a job opening from NASA in the local newspaper, that announced that they were looking for people to do programming to send Man to the moon. And she thought “Wow, I’ve got to go there!”.

Margaret was the first programmer at NASA. She called herself a Software Engineer, but it was considered a joke! You have to remember, back then, programming software (the code that tells computers what to do) wasn’t really a thing people went to school for. It was a new field, but it was developing quickly.

NASA soon realized that Margaret’s “software engineering” would be the tool they needed to beat the Soviet Union in the race to the moon. And at age 28, she had joined MIT’s Apollo project (1965), and would eventually lead the team developing the onboard flight software.

One of her first assignments was to develop software for an unmanned mission, involving telling the computer what to do if the mission aborted, for instance if one of the key instruments decided not to work, or if the craft ran out of fuel.

Mostly, men were working there, and they had somebody at home looking after their kids. But Margaret had no choice, she took her little girl (Lauren) with her to work – nights, weekends, whenever she had to test the software and do things that astronauts would have to do. So Lauren (4 years old at the time), who had been seeing her mother “play astronaut” testing everything, also wanted to play astronaut! All of a sudden everything came crashing on the simulator! Margaret realized that what her daughter had done, was to select the pre-launch programme during flight. So Margaret thought, “What will happen if in real time the astronauts did what Lauren did by mistake?”. But NASA didn’t want to hear a thing about it. They said that astronauts were trained never to make a mistake! But Margaret added code to the Apollo flight software to account for human error.

On July 16, 1969, NASA launched Apollo 11, the first manned mission to the moon. Three minutes before they reached the Moon’s surface, a crew member set a switch in the wrong position, sending the software into overload (it had too many tasks to do at one time)! Now there was an emergency! Everything happened that Margaret thought would happen if they made a mistake! They had to make a decision – were they going to land or not land? Luckily, the people at Mission Control trusted the software and decided to carry on with the mission! And because Margaret included that code of hers, telling the craft to ignore everything and focus on the landing, on July 20, 1969, 600 million people around the world watched Apollo 11 land on the moon!!

In 2016, Margaret received the highest civilian honour in the United States – the Presidential Medal of Freedom – for her work on Apollo and the creation of the Universal Systems Language. Barak Obama, president at the time, handed it to her.

Margaret leaves us with the message, “Be fearless, even though the experts say, “No, this doesn’t make any sense”!”

Do you think it was all just easy for Margaret – to do Math, eventually switching over to Programming computers, and even helping to land the space craft on the moon? Do you think it all just came into being by itself – Margaret had to do nothing, it was all done for her? No, Margaret had to work hard, and keep at it! She had to persevere in a time where males were generally accepted to be the worker and achiever, and females not. We all have talents and abilities. It just depends on what we do with it – how we choose to use it. But one thing is for sure: things are accomplished through hard work and practice. And if you decide to do those two things, nothing can stop you, and who knows, maybe you yourself end up walking on the Moon some day!

Whatever the mind can conceive and believe, it can achieve!

This picture book by Dean Robbins is a wonderful introduction to the life of an awesome person who didn’t stand back for anything, but pursued her goals all her life, and achieved amazing heights!

The story also led to a quick discussion about the first of the Habits of Mind the School is built on: Persistence –
Stick to it! Persevering in task through to completion; remaining focused. Looking for ways to reach your goal when stuck. Not giving up.