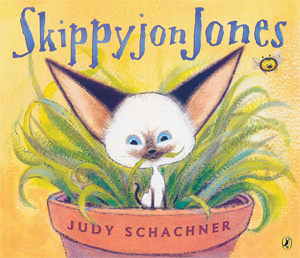 Our next-to-last official Book Club meeting for 2019 proved to be fun as always! Continuing exposing our members to reading in other languages (see August’s post), we read the very fun story about a little cat called Skippyjon Jones (ISBN: 9780142404034). American children’s author-illustrator Judy Schachner does a brilliant job to introduce some Spanish terms and the culture of Mexico as we join Skippyjon Jones on his wild-imagination adventure!

Skippyjon is a cute and cuddly Siamese cat with a wild and vivid imagination that ends him in a lot of trouble. When his mother finds him (once again) waking up with the birds (literally in their nest), she sends him to his room to think “about just what it means to be a cat”. But Skippyjon Jones can’t help venturing off after the images in his head, and it leads him on an adventure as Skippito Friskito, the “great sword fighter”, who goes “incognito” as a Chihuahua to free the Chimichangos from El Blimpo Bumblebeeto Bandito who steals the frijoles (beans) they love so much, and is now after the canines… But what will his mother say?

It is a terrific picture book, making a great read-aloud, capturing the crowd’s attention. Skippyjon Jones won the EB White Read Aloud Award in 2004, and certainly the hearts of our little members!

After a day where not everything ran smoothly (first somebody came to say the premises was to be used for a funeral (which it wasn’t), then the camera’s batteries were flat (both sets), and everybody was very chatty during story time, which makes it very difficult to follow (and read) the story), we certainly needed to have a fun adventure with Skippyjon Jones!